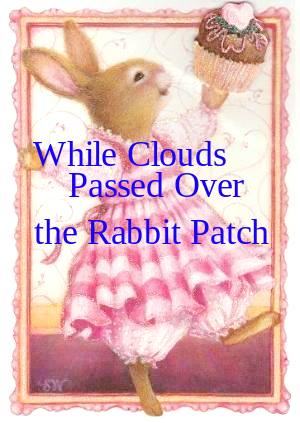 The last Friday of spring dawned gray over the rabbit patch.  I dismissed my plans to mow as it was damp and grass will clump and look untidy under such conditions.  It was a good time to pull grass from around the flowers and I did so for a while.  I watched the clouds passing over the rabbit patch. There was no hurry in them-and I knew it meant rain.  At that moment I had a notion to make a cake.

I called a few friends .  They agreed that it was a good day to eat cake.  We decided on a time-which was “afternoon”,so no one would have to worry about being late-(there is no “late” at the rabbit patch.)  I gathered what I needed to make a chocolate raspberry cake, and then I took to the woods for elderberry.  I was determined to fill a vase with those fragrant, graceful blossoms that the Irish hold so dear.  The woods were “lovely, dark and deep” but that did little to comfort me.  I kept a watchful eye out for snakes and regretted not inviting Cash on the venture, quickly.  I found wild strawberries and blackberries. They have a sinful amount of thorns but I cut some anyway.  They scratched me without mercy and I disturbed a family of rabbits in the process.  They made such a ruckus in the bramble, I was convinced it was a snake and it took me a minute to recover.  I cut some honeysuckle and thought how pretty that would be with the elderberry.  I was halfway down the path and hadn’t seen elderberry, but I smelled it.  It was getting hot and mosquitoes were buzzing about.  I knew my friends did not expect me to take such measures, but elderberry has a short season of blooms, and there is nothing else like them.  I hoped I didn’t get ticks-or redbugs.  Thank goodness I am not allergic to poison vines.  I finally found the elderberry.  It was growing in a thicket  so overgrown that I don’t even think the rabbits could get through it-let alone me.  I resorted to  roses and gardenias, which were growing in more civilized places.  I had  gathered quite a bouquet and  knew it would require a large vase.  I arranged them while the cake was cooking.

The kitchen floor was littered with small leaves and twigs, and I was a mess- and needed to check for ticks.  Somehow I got the floor scrubbed and myself presentable by afternoon.  Things took a turn, and Rae was the only one that made it.  We ate a lot of cake on little china plates- being I had gone to so much trouble and we talked a good long while.  I have been knowing Rae almost thirty years.  Our children were young then, and so were we.  There is an “understanding” between us and mere words won’t do it justice,  but it is beautiful and solid-it is genuine and precious and my heart is grateful for it.

We strolled leisurely around the rabbit patch afterwards. I showed her the acres of clary sage in the fields behind the barn.  I also showed her the sad state of the garden.  I learned that she calls running vinca “snow on the mountain” and I like that name better.  I showed her the “see through” flowers.  As we strolled from flower to flower, we wondered aloud about some things.  There is no risk when we speak our truth. A friendship, that has spanned decades, is of great comfort.  Life changes are unsettling no matter your age.  I often say, that now  that the kids are grown up, I feel as if I am fourteen again, unsure of how to proceed and needing to find my identity all over again.

The sky was silver over the rabbit patch when Rae left.  Light had changed very little over the course of the day and it truly seemed timeless without shadows and sunlight.  I went back in the kitchen.  It was a pretty table after all, even without the elderberry.  I washed the china plates and felt happy as I did it.  Only, the cake tattled that a wonderful occasion had taken place earlier, right here in the kitchen, while the clouds passed over the rabbit patch.

22 thoughts on “While Clouds Passed Over the Rabbit Patch”