This is no ordinary day at the rabbit patch, for snow blankets the territory.  School was dismissed early, yesterday-and so all afternoon, I waited for snow.  It has been more than five years, since I have seen more than a scant dusting.  By around four o’clock, it was sleeting and I feared we would have to settle for an icy rain.  Around nine, it started snowing at last.  I was sorry not to be able to watch it fall as that is such a lovely sight, and so very rare in these parts, but I consoled myself  that “Joy would come in the morning”.  I was up by four am .

Snow was everywhere.  There was wind and it caused the snow to swirl wildly.  Such conditions are unheard of here . . and so I woke Christian.  I could not stand thinking he would miss this event.  Christian  has stopped me from kneading bread to see the moon rise and so it did not seem the least bit odd, to wake him under the circumstances.  We stayed up a while, and then went back to sleep until morning light.

Temperatures are supposed to remain just below freezing  until Monday, so I am prepared to  stay on the rabbit patch for a while.  Of course, snow does not come without a cost, it seems.  I will need to replace a pipe in the laundry room, as a chunk the size of a large egg, broke off, due to ice.  Today, the hot water is frozen up and the washing machine works when it cares to.

Christopher Robin, does not share the enthusiasm for “the winter wonderland” that we do.  His curiosity is satisfied by peering out the windows.  Cash, on the other hand, dashed madly about and even rode a snow board!  (left over from ski trips).  Boxers are known as “eternal puppies” and Cash was living proof of that today.

It is my great pleasure to announce, that I made cookies this morning-soft cookies, that tasted  good enough to warrant second servings.  I made “tea cakes” , an old southern variety.  They are like a shortbread cookie and for a while, the kitchen smelled, like quite a baker, lived here.  I so hope, it was not “beginners’ luck”.  It just seems shameful that a “Honeybee”,  (or a grandmother) wouldn’t be a good cookie baker.

It was still snowing in Elizabeth City, when  I talked to Jenny, in the late morning.  They are likely to get some snow every winter, but not by the foot,  as they had so far. Lyla was determined to build a snowman and so Will helped her out. I am trying to muster the courage to make snow lanterns, but the wind is something fierce and very uninviting.

I did collect snow for snow cream.  It snowed very few years in my childhood, but when it did, we made snow cream.  Snow cream is a simple concoction of snow, vanilla, cream   and sugar.   It is made according to ones’ taste and can be made by the bowl or in a batch. Powdery snow is the best kind and we were not short on supply of that, today.  I suppose all sorts of variations would work .  Honey could replace sugar-so could maple syrup and I am sure you could really add whatever your heart desired . . . but I made mine just like the kind I grew up with, today.

I always think of Frosts’ Stopping by Woods on a Snowy Evening”, when t does snow, and I did so today.   I understand  “stopping to watch woods, fill up with snow”.  It is as good a reason to stop, as I know of. 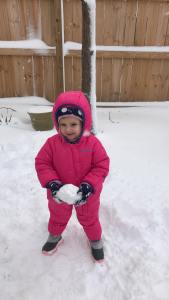 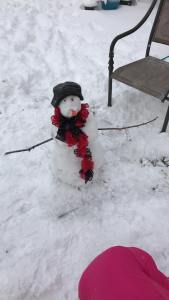