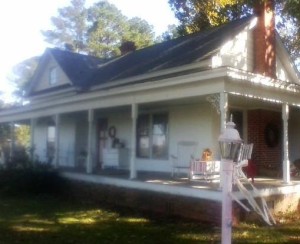 The Easter dinner on Sunday was lovely.  Mama and Daddy came a little later than usual, because of all days . . .I over slept.  This is not a good thing, when you are cooking a turkey.  I felt the same dreadful way as I do when it is a work day.  I do not like to start any day in a hurry, but this day demanded I did so.  The first thirty minutes are  like a blur now, that resulted in the turkey being put in the oven, and a cake being mixed to be topped with strawberries , later.  I did not linger over coffee, but drank it in gulps .  Some time or another, I ate a piece of buttered toast.  By the time I was peeling potatoes and turnips, I  realised it was not going to be as late  as I had expected . . . .and so I whipped the cream with a bit of strawberry extract, with a lighter heart.

By mid afternoon, I was on the way to Elizabeth City, for a week. . .something I have looked forward to for a while.

The morning was mild and Lyla and I were on the porch by eight am. We sat in the swing  in our pajamas, and sang morning songs.   What a lovely feeling washed over me.  The day was unfolding and it belonged  to us.  We came in and I hastened to complete a few chores .  Jenny had to log some hours with her internship and Will had gone to work.   . .so we set off the “laughing river”.   The beautiful  Pasquotank river bank is less than five minutes from Jennys’ back door. . .of course we took the long way.  When we turned the first corner, the street was lined with dog tooth violets.  Lyla and I both sighed aloud at the sight.  It was like walking through a sea of flowers.  Buttercups came up where they could, but the violets were thick and left little room for things like buttercups.  There were trees blooming in shades of lavender and white to complete a fairy like landscape.  This was my idea of spring and it filled my heart with hope and joy.  Lyla wanted flowers for her mama, so we collected a small bouquet, which she clutched in her little hand as we went along.

We arrived at edge of the river shortly after.  The banks were green and dotted with dandelions.  Lyla did not want any dandelions in her bouquet, which amused me.  We did make a good deal of wishes.  We took turns, and I realised my wishes are little prayers.  Lyla listened intently and followed suit.  After the “Sweet Hour of Prayer”,  Lyla began her “balancing act” on the railway ties, meant to mark the parking area.  Thankfully, there is hrdly ever any one parking. Mostof the visitors are pushing strollers, walking dogs or biking.  Lyla walked the ties for close to an hour, with only a few mishaps.  Meanwhile the river rolled along merrily and the sun shone bright, lighting up the dandelions til they seemed to glow. To sit by a river, is a wonderful thing.   Somehow, you end up tossing “what ails you” in the water without thinking about it.

On the way home, things changed.  The wind was cool enough to make me hurry and it fell on us in spurts of heavy gusts.  By evening, it was cold.  The way of spring, I thought.  To me it was just the sort of day I loved.

I expected the “early service” to be cold, based on the chill in the night, but it was not.  It was a somber service, in the absence of sunlight, but pleasant enough.  The birds were as busy as ever.  The squirrels were too.  The air carried the faint smell of young blossoms.  I love the peace of mornings.

Lyla and I were soon off for a picnic by the river, which was as “quiet as a church mouse”, on this day.  It looked like a sheet of glass and made both Lyla and I get quiet too.  We ate and then blew bubbles.  how lovely the bubbles looked floating over the river.  At long last the sun came out strong enough to cast  dappled shadows.  We decided to head for the playground, in the opposite direction.  We passed the house of the Nobles family, on the way and stopped to smell a large bed of hyacinths and lily of the valley flowers.  I remembered them from last year and had intended to visit them, this week.  The playground was not too busy and Lyla had the place to herself at intervals.  I sat on the bench and felt overwhelmed with a feeling of contentment.  What a grand life, I thought.

We walked back under canopies of white, pink and lavender flowers-and amidst wild flowers springing up along the side walk.  Lyla asked me to pick a few more for her bouquet.  She pointed out several robins and called them by name.  I am confident now that she can identify the cardinal and the robin by sight,-and the mockingbird by song.  I did have the chance to introduce her to some noisy crows who spent the afternoon quarreling with some sea gulls, at the park.

Jenny cooked supper on the grill and we ate outside.  Such a nice conclusion to a happy day.  It did not seem the least bit odd to hum the words of “Joy to the World” . . .even if it is April. 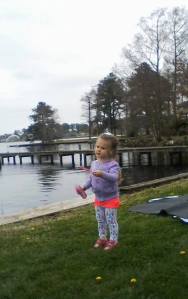 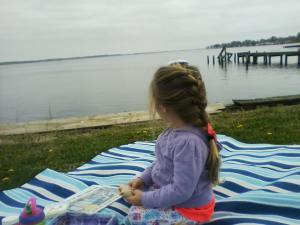