This was not a typical week at the rabbitpatch.  I missed most every early service and have no clue if the ginger lilies are blooming or not.  Only God knows what the sparrows have been up to.  That nagging ear ache that has been plaguing me on and off for a month, made its’presence known with a vengeance and stopped me in my tracks.

It all started, a few weeks before the school year.  I am not new to having ear infections though I did not suffer from them regularly as a child.  Usually, I get through them without to much ado.  This particular time, I could not shake it for longer than a few days, before it would return again, each episode worse than the one before.  When the pain was unbearable, widespread and I could not hear a thing, nor open my mouth, I went to the doctor.  I was in quite a serious predicament, it turned out.

The  good doctor, did not raise an eyebrow at my oregano oil, ginger and clove oil  remedies.  He thought it was a good attempt.  I had stopped when, the pain left, and that was a problem.  He did not even fuss that I had taken some remnants of antibiotics, that did not belong to me.  Maybe I was too sick to stand a lecture and he knew it.  I asked him for morphine and we could call it a day, but that was not the solution and so so he went about writing one prescription after another with all sorts of directions.  I was lost at number three.  I did hear bed rest and hopefully avoiding the hospital.  He asked me what pharmacy  to call and said I do not have one, but there is  small friendly pharmacy,  that I buy from honey from and he knew the one, I meant, beside the grocery.  So I went home  with an arsenal of bottles, and went to bed.  Beside me was a little table with bottles and vials and a written schedule, which required a clock.  Christian made every soft food, he could concoct for me.

The children were so relieved-Mama was so relieved for they had all wanted me to go, for weeks.  The last time, I had gone to the doctor was a dozen years earlier for an emergency appendectomy.  It was to this same doctor, who has now decided I must be dying to seek help.  Rest assured I have learned a valuable lesson.

The infection had invaded the whole side of my head and jawbone.   I will leave the story here, as I do not mean to whine, nor sound any more stubborn, than you have already pictured.  “Pride goeth before a fall.”  rings true, I suppose.

By Sunday, I felt good enough to get on with the business of living.  At last, I thought again about the landscape.  I noticed the berries on the dogwood were now a bright red and here and there, were clusters of golden leaves.   I still missed the early service, and so am still in the dark, about the rabbits born in spring and the plight of the sparrows just now.  Thinking on such things seemed as healing as the tonics from the  good doctor.  With all the complexities of this world, I believe it would do us all good to think about sparrows occasionally. 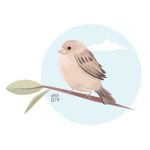 Of course, in the midst of all this, we are awaiting the birth of Jennys’ little daughter.  It could be  really anytime, but it could be weeks.  There is also a little cottage to think about, found recently.  . .that may or may not work out.  Time will tell as it always does.  Several have come and gone.  One was too small, one was too big.   . .and then a few that seemed just right, slipped through my fingers like water.  Still, I am convinced, that my fairy tale has a happy ending, just waiting to spring up.  I am doing my best to enjoy the “foot path”  that tends to wind and twist, to the next rabbit patch.  One day, I will “round a bend” and there it will be!  Until then, I move along as I am directed and plan which roses to plant and I wonder, what the morning will look like and where the “moon shine” will fall.

On Monday morning, I woke in time for the early service.  I felt the best I had in weeks.  Oh, I ought to never complain about a thing, I thought!  How good it felt to be me again, faults and all.  I listened to the morning song of the cicadas in the stillness of the morning, and decided they were celebrating with me.  I thought of all the things I love and I was glad for them all over again.  I did not think of things like fancy jewelry or gadgets.  Instead,  I thought about things like listening to Christian play his guitar, walking by the laughing river with Lyla and cooking on Sunday for Mama and Daddy.  I wasn’t a bit sorry for watching robins and rabbits, or listening to the dreams of my sons.  . .or spending this “holy time” with Jenny.

Now, this whole concept, is an old one.  . .but it it seems worth repeating . . . we should do what we love. People who have some sort of sickness or encounter with tragedy, always say the same thing.  I do not even attempt to compare myself with battle of the every day warriors, but   in the midst of a calamity, no one ever says, I wish I had a nicer car, or had worked more and had a finer home. I was simply not well, for a while, but these things crossed my mind and the clarity of the truth struck a deep impressive chord.

Oh that we all find and recognize the core of our happiness and live our journey with our own authentic  joy  .  Might we all think about sparrows from time to time.

39 thoughts on “Thinking about Sparrows”