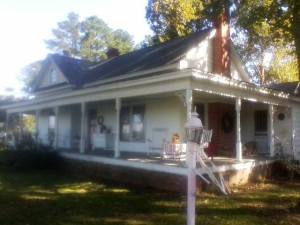 There is a heavy frost this morning.  The morning sunshine causes it it to sparkle and glisten, as if it were a field of crystals .  The frost was so heavy that I took a second look, to make sure it was frost . . and it was.  All of the rabbit patch was dusted til it looked like a fairy land.  There isn’t a single cloud in the sky and the lone old pine at the front of the yard is boasting heavily of its’ greenery.

A few years, after I moved to the rabbitpatch,  we decided to have cable installed.  I watched the technicians  plant a receiver amongst the old trees and felt it could be a mistake, but was not confident enough to say so.  After all, I do not understand the concept of such things.  We had trouble with reception “right off the bat”.  I complained and so a man was sent to find the problem.  Within five minutes, he told me, it was the trees and that I ought to cut them down.  I evenly said “Get off my property.”  I do not know what welled up inside of me, I had never said such a thing –  but to me, it was as if he had spoken against something sacred.  He left immediately and the boys and I trimmed a few of the lower branches and all went well.  We still laugh about it, me especially, for the cable is just a memory now, but the oaks remain steadfast and the pine still whispers.

With today being Saturday,  there is no dreaded rush, which satisfies me deeply.  There is housekeeping of course, but cobwebs stay put, til you are good and ready. I already have curtains in the laundry, soaking  in rose soap and  I did mix up a concoction, to try on the floor.  I had read the recipe and the pictures were quite convincing.  I did not measure exactly as I made the solutions, which was a mistake, as the thing foamed and ran out of the bottle.  It reminded me of the “volcanoes” we used to make in science class.  I sat the bottle of the frantic liquid on the floor and the stuff soon covered a square foot !  As I cleaned it up, I noticed that the floor was as clean as I have ever seen it, where the spill was made!  I will measure next time, for lemon juice and baking soda are apparently a “dynamic duo”.

As the last week of January, looms ahead, I must put the “farm” back on the market.  A part of me, is quite anxious to do so -a part of me dreads it.  I dread the documents, the appointments and regulations,  as I always dread anything “official”.   . .and the long state of chaos of the last ordeal, is still not forgotten.  This time I will have an agent, for they like such business.

One thing that has happened, is that I no longer feel the least bit frantic or any degree of desperation about my plight in selling.  There is a peace that has somehow nestled deep inside of me.   This does not mean that I want to sell the place less-it means simply, I at last trust that all is as it should be and this will remain the case.  I still look forward to a snug little cottage as much as ever.  I want a smaller property.  I want the freedom, this will afford me to have even more time with children and grandchildren, for I can never have enough of that.  . .  and  I want my children to stop worrying  that the barn will fall down and other such catastrophes – that are all valid. None of that has changed.  . .and be aware, that  in the big picture, this is a lot more than just selling a house.

We often say, that we have “given things to God”, but I  often reserve a small bit of it, to worry over.  To really give all of a thing “lock, stock and barrel ” over, is  no small feat.  . . at least for me.   It  really makes no sense to bear a burden, anyway and  oh the sweet liberty casting it off, yields.

As I lament over this predicament, someone dear to me has a different battle going on-one that makes mine insignificant.  Miss Claudia, Wills’ mom and my friend, has been sick for about two years with that hateful disease, we call cancer.  Just recently, she has stopped treatments .  The doctors say, these are her final months, here on earth.  Of course we are all heart broken.  It is like a gloomy cloud hangs right over our heads, now.   Miss Claudia seems stronger, than any of the rest of us.  She just keeps gong about her business, encouraging others and reading to Lyla.  What a pillar of strength and how I admire her.  Heroes casts so many different shadows.  . .and to know even one, is a blessing beyond measure.    I am blessed beyond measure.