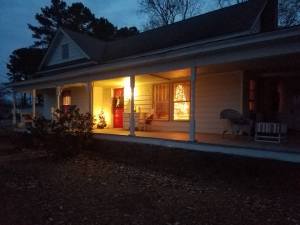 The Christmas gathering that happened yesterday is over now-and another happy memory.  As I predicted, Brynn loved the boxes but a doll from her Aunt “Glory”-which is really Delores-did spark a keen interest.  Lyla named her aunt so, for she could not say “Delores”.  Ryan was adored by all and was content the whole time.  Lyla and Dana spent a good while playing.  Dana is seventeen, but will “play” with Lyla, patiently.  There was enough food left to do it all again.

Now it is “Christmas Eve”-the most enchanting night of the year.  Many will attend services tonight, many will be frantically finding that last item in a mad dash effort, many will gather . . .and children everywhere will be  especially good, hoping to make amends for past transgressions. . . and go to bed early.

Since the grandchildren were born, Christmas eve is a quiet time at the rabbitpatch. Even when my children, were all grown up, they spent the night here and woke to a special breakfast.  That is a beautiful  and treasured memory. . . .but I do have others.

Christmas was very quaint when I was young, compared to now, but the recollections are every bit as beautiful.  I remember, going to my great Aunt Agnes’ house to sing Christmas carols, while she played the piano-straight from her heart.  She would toss her head and nearly dance off the stool as she played.

There was the visit to “Mama Hodges” -my mothers’ grandmother and Aunt Agnes’ mother.  This was always a very solemn occasion, as children were to sit quietly, at her house.  Your name was called to collect a Christmas card with a five dollar bill in it and say “thank you”.  I did not know what to do with money, for I had never needed any and so I always gave it to Mama.

On the Sunday night before Christmas, the church would exchange simple gifts.  We would all draw names, weeks before and  then meet in the small fellowship hall.  How exciting that was to sit and listen for your name and find out who had drawn your name.  Upon leaving, each person was given an apple and an orange.  This continued til I was a young woman.

Apples and oranges were always associated with Christmas, back then.  Delores and I would know Santa had come, when we caught the smell of apples and oranges in the early morning hours.  The whole house smelled of them.  I asked Mama why, one year, when I was older and she said because when she was a child that was the only time of the year you could get “the out of season” fruit.  I did the same thing with my own children, because of that memory.

I have told this before, but it bears repeating.  I suppose, it was a lean year that Mama took to sewing non stop, just before Christmas.  Mom was a good seamstress and used to make all of our dresses -and her own, when we were young.   I got a doll each year at Christmas . . .so did Delores.  They were just department store dolls, but since we only got them at Christmas, well, we loved our dolls.  We never cast them aside.  Instead we ended up with several “children” that got sick, were naughty sometimes that got cold and needed blankets -our dolls were our first children.  One year, the dolls came with clothes that matched our dresses!  I wondered how Santa did that!  Years later, Mam said she could not afford the clothes for the dolls, so she gathered every scrap of material and trim to make the little dresses and bonnets.  She told me this  years later and it still stings my eyes to remember.

There was the year, my cousin “Cookie” got a pony.  We all had ponies in those days.  Cookie named her “Rose” and could not wait to join with the rest of her cousins for weekend rides through field and wood.  We all went to see Rose that Christmas day.  She was a beautiful golden shetland . . with a terrible temperament!  She tossed her head and dared to bite and kick anyone who approached her!  Cookie was terrified-we all were, but the men were sure that Rose could be tamed.  They were wrong.  We had to throw apples to her all of her life, for she was that fierce.  Cookie rode one of our many gentle ponies, instead on the week ends, while the beautiful Rose grazed haughtily in the pasture.

Everyone had a Christmas tree,  They were usually cedars that had been growing somewhere on the farm.  The trees were draped in silver tinsel and glass blown ornaments.  Bulbs of every color were strung on them and the “bad side of the tree” was always next to the wall.   One year Grandmama surprised us all with an “artificial tree”.  I can not recall my memories without another account of this for the thing was quite a shock.  It was an aluminum tree, like she said the folks in Florida used.  Grandmama was so proud of this silver tree.  Her face nearly glowed as she showed off this  modern prize- I could not say a word.  I had never even thought of such a thing.  The branches were sparse and the ornaments, which were all the same, were in permanent places.  When Christmas was over, all you had to was fold the thing up and put it back in the box.  Florida seemed like an odd and faraway place to me, after that and I had no desire to go to a state that couldn’t grow trees!

Every year, we read Lukes’ account of the birth of Jesus.  I memorized it word for word by the time I was ten and recited it at school, when I was in the fourth grade.  My favorite part was of the shepherds tending sheep when suddenly the sky was filled with angels.  I still think how beautiful that was. . . a sky filled with singing angels.  As a child, I would peer into the night sky and try to imagine it. . .I still do.

I suppose these simple memories of Christmases past, seem unimpressive and archaic.    . .but,  to me they are beautiful and beloved  and dear to my heart. 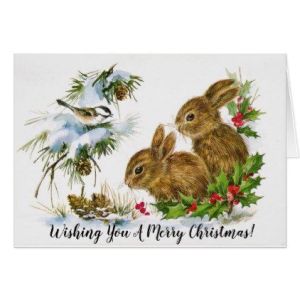 14 thoughts on “Memories of Christmas”