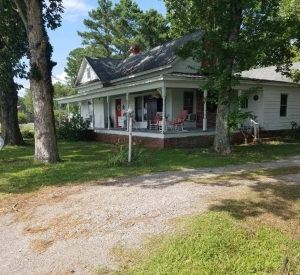 Mama and I took a short  but sweet trip to Raleigh a few days ago.. We left on Monday and came back on Tuesday. Sydney had to be somewhere or another for most of Tuesday, so Mama and I would care for little Ryan, in the meantime.  Ryan has such a sunny disposition, that it can hardly be considered work to tend to him.  He is a happy and loving child with a gentle nature.   . .at least according  to his Honeybee.  The day after we returned, I started gathering what I needed to file for social security.  Business of any sort renders me bewildered .  It was the same way, whenever Daddy tried to talk to me about carburetors.   At least, I got started, I suppose.

With a “tropical storm”  in the forecast, I spent Wednesday preparing for a brisk wind  and rain.  The weather folks have been slap wrong for a good while, but I tucked the geraniums just inside the front door and remove the wind chimes . . . just in case. I cooked a pot of dried yellow peas and carrots too . . .just in case.  It is an awful thing to lose power and be hungry, after all.    On  Wednesday night, with a flashlight by my bed, I made a mental list of inside chores to do on Thursday.  Thursday morning dawned like any  other Thursday.  As the hours passed, clouds moved in, and a light rain was falling before noon.  Later the wind picked up a bit, but that was all.

I ended up with a sizable bag of clothes to donate . . AGAIN!   . . .and that dreaded “business drawer” was reduced dramatically.   I now have a folder with social security printed on it . . . and it is terrifying!  If I were wealthy, I would not take a trip -or buy jewelry . . I would hire an accountant!  To calm myself, I went back to memory lane.  . . even though, there was a sharp curve, this time and calamity just around the bend.

Second grade was just awful  The school ordered a new curriculum for us . . and we were introduced to Modern Math.  Being able to add and subtract, was no longer enough, for now we had to learn how to show our work with parentheses and such.  I also had a teacher that inspected our lunch trays .  We must eat every morsel . .or else.  I learned to stuff my milk carton with “spanish rice”  and peas and could pass the inspections that way.

Third grade came and for  the first time, I liked school.  I had a teacher who could play the piano and she taught us lovely songs.  I won a writing contest that year and was selected to read some sort of announcement on the radio.  Grandmama would stop everything, when it came on and gathered all of us to listen.  We were taught poetry and how to write in cursive and in math . . recite the multiplication tables . . which made sense, thankfully. I liked fourth grade too.  I still preferred the farm, but school was bearable especially since the fourth grade teacher read us chapter books daily. Then everything changed.

Grandmama had complained  about her arm hurting, for as long as I could remember.  She would stand in the backyard, holding her arm against her chest and sometimes cried.  She would direct her grandchildren to do all sorts of chores and we would scurry about til the “spell passed.”   The we ate supper. Every Friday, on the way to town, we would stop by Dr. Swindells” to get her blood pressure checked and then go on to the A & P.

In the middle of an ordinary night, in July, we woke to a commotion.  Delores and I were whisked away to my Aunt Agnes’ house.  Pop and Mama took Grandmama to the hospital.  The next morning, while Aunt Agnes was cooking breakfast, my cousin Faith played the piano for us . . without us having to beg.  Faith played like her  mama, Aunt Agnes.  Lively ragtime tunes rang out and I was happy.  Then Aunt Agnes took us home and the minute, my foot hit the soil of home . . .I knew somehow, that Grandmama had died.  Mama confirmed this a few minutes later and I took off running and crying.  As I write this, I weep, now, fifty years later.  It remains one of the saddest moments of my life.

A few days later, the UPS truck showed up.  Grandmama had save up her money to buy me a guitar.

I never knew Grandmama was sick in any way.  Sadly, I had gotten use to her arm hurting.   I think we were all shocked, really. Pop  was not the same afterwards.  He wasn’t piddling about the farm a bit. Instead I would find him crying, in the barn or behind it.  Sometimes in the living room, in broad day light! (Pop was never in the house in the day time.)  Nobody was the same after Grandmama died.  Mama was young, heartbroken and thrust in to a new role in the family.  Aunt Josie and her family, moved in with Pop, after a while.  Within a few short years, Pop sold a large portion of the farm . . .well, everything changed.  . .when Grandmama died.

A few years later, I thought boys were cute.  I cared about how I looked and what I wore.  I did well enough in school . . but I was far from brilliant.  I was as shallow as could be and did everything possible . . . to have the shiniest hair. Dolls were replaced with records and earrings.  I got a job in town at a dress shop. Even so I was known to walk the edge of the fields  in evenings.  I would think silly thoughts and write them down.  I quit playing Hank Williams songs on the guitar and started playing pop love songs.  I did stay out of trouble, for Daddy wouldn’t give me the chance, to ruin my life.  The “country, may have  gone  to town”  but I had to be home by ten o’ lock -and not a minute later.

It wasn’t until I had my children, that I had an inkling of just how blessed I had been, in my youth. Back then, the elders sacrificed without complaining.  They did not announce it nor expect a badge!  All work was valuable whether it was toiling in a field, peeling apples and most especially and with utter devotion, raising the children.

This is why I tell the story and preserve what ways I can, from that beautiful  time.  I admit, that since then, many areas of life have been improved.  . .but the substance of those days  . .the simplicity of that time -allowed me to really know my family -and for them to know me, faults and all. Their influence  was mighty and still governs, as I speak.  Besides that, all of the convenience of these days hasn’t seemed to make such a big difference, for no one has “time to do anything”!  If I sound old, it is because I am . . .but I can still remember the sound of my grandmothers’ voice . . .and I do not take that lightly.

27 thoughts on ““Most Especially and with Utter Devotion””