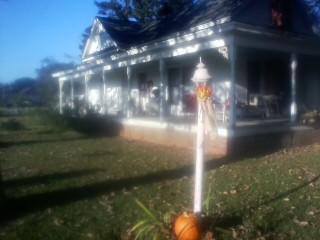 “Jack Frost” came last night with a bucket of shine.  When the first rays of sunlight fell this morning, the  fields sparkled and the woodlands seemed  to be strewn with diamonds, instead of pine cones.

I remember as a child, daddy saying “Rise and Shine! Jack Frost came last night!”  I would look out the window quickly, hoping to catch a glimpse of  the sprite-like creature and his shimmering bucket.  I never did see him, but I saw his magic.  Not an autumn passes, that I do not think of “Jack Frost” and hear my daddy’s voice announcing the occasion of the first frost.

Frost is a significant event for country dwellers.  It puts an end to chores like mowing pastures and ditch banks, for the better part of the day.  Gardeners who plant cabbages and collards are glad of frost as it sweetens the greens served for Sunday dinners.  No longer will pests plague the autumn garden, either.

The roses in the “Quiet Garden” at the rabbit patch, will take a well-deserved rest.  I will resort to branches of brightly colored leaves for  center pieces and chrysanthemums from the porch.

I may have better luck with  attracting the country birds to the feeders this year as the hurricane scattered the french mulberries like dust, in early October.  The rabbit community burrows in the young woods and must resort to bark or the leaves of the common privet bushes, after the frost.  Of course,  I think of them too and toss apples and greens along the wooded path.

In November, gray skies often cover the rabbit patch-when they do, autumn leaves seem to glow brightly.  I have noticed this for a long while now, but can not figure out the science behind it.  In the farmhouse, I am apt to cook root vegetables, in November, likewise any of the dried bean varieties.  The boys love my corn chowder, too.  I bake bread once there is a chill in the air, and Kyle is especially glad of that.

Books and quilts are found in every room, these days.  I will attempt simple crochet again and I will sketch flowers and rabbits.  I will wait for the golden moon, that is much talked about and I will wish on it for good measure.

The wild kitten is sleeping inside the farmhouse the last few nights.   Maybe he saw “Jack Frost” coming and gave up the notion of being feral.  He has been quite ill-mannered with Cash, but Cash being a good-natured boxer, does not take offense to his poor behavior.  I have high hopes that this kitten will give me his name soon.

22 thoughts on “Shine on the Rabbit Patch”