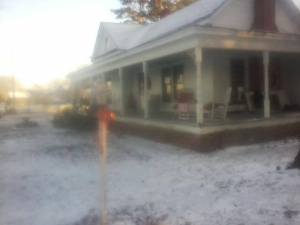 My affair with snow is quickly on the decline.  The snow that lingers around the barns, and under the pines is hardly snow at all anymore.  It  lies in old silvery patches now and pales in comparison to its’ previous form.  The diamonds have melted on the trees too.  On the drive to work, I saw their last attempt at glory and it was a beautiful grand finale.  It reminded me of the verse, about “the trees singing out in joy”.  They were this morning, when I saw them.

The rabbit patch territory is an awful mess now.  Where the snow used to lay and glisten in the moonlight-is now mud and slush which tracks dependably all over the farmhouse floors.  We all leave a footprint, no matter how carefully we tread.  It is a good thing that the pipes thawed today.

In spite of the the snows’ uncivilized departure, my affection for it remains.  I watched it fall.  Sometimes it fell fiercely and then  later , it fell like feathers  wafting.  Snow seldom falls in most southern winters, so I took great notice of the occasion.   I have no idea, how to put chains on tires, or even what that means.  I bought a snow shovel years ago-very cheap, which we used for goat chow and oats for the little horse. I can not fathom  shoveling snow, before you go to work on bitter cold mornings, either.  Under those conditions, I may not have counted a snowfall a glorious affair-but for me, at that moment, it was.

I have often complained about the ways of country birds.  I have said they were an independent lot and unappreciative of my bird feeders.  My friend, Rae lives in town and has named the birds in her back yard.   They are on  such good terms.   The town birds are friendly like that.  I took another chance on the ice-and put seed out just in case the rabbit patch birds would change their minds when faced with ice.  Moon Shine, who used to be wild, set up camp in a chair by the window.  When his eyes began to dart around and a curious look was on his face,  I sprang to the window, just in time to see cardinals, robins and a little sparrow eating mightily together.  I thought of my grandmother.  She loved birds and taught me to do the same.

The farmhouse is almost cold in winter.  We will ferry wood on foot for a while, in mud.  We will track the mud everywhere, it ought not to be.  Rabbit sightings are scarce and nothing growing yields a fragrant bloom in this season-but I have noticed the stars seem bigger in a winter sky and moonlight on snow is enchanting.  The hearth is warm with fire brightly burning and sometimes the trees sing out. . . and I think we ought to love the winter too.

24 thoughts on “The Snow that Lingers”