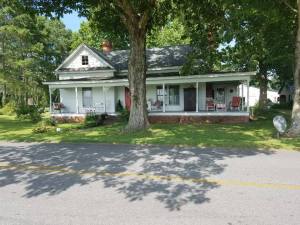 On Thursday night, I saw the stars over the rabbit patch.  I had not seen them, due to clouds, for the better part of a week.  I had missed the silver belt of Orion-and the friendly Dog Stars.  I was glad to see the Big Dipper and the little one too as I had missed them all.  When thick clouds were hovering over the old barn and the old trees, I tried to remember just where my old friends had been “set in the firmament, to give light to the earth”.

I also packed on Thursday night.  Loyal readers of the “Rabbit Patch Diary”  know where I was going . . .back across three rivers, past fields and autumn flowers . . to another rabbit patch,  Elizabeth City.  Friday was a teacher work day and so in my absence, children would not  miss violin classes.  It made good sense to me to pack my bags and spend a few days with , my only grandchild, Lyla.

I attended the “early service” this morning, in Jennys’ backyard.  Daybreak was chilly enough to warrant a light jacket.  The air was crisp and carried the scent of pine straw.  The sun came up with a shocking brilliance, and when it did, I thought I heard the earth singing.  A young redbird watched from the cedar tree.  Lyla and I saw him yesterday in the evening.  If I see him again, I am likely to give him a name.

Lyla attends nursery school, now on Thursday and Friday mornings.  I was never fond of this idea, but tried to still my tongue-and hoped for the best.  Childhood is so fleeting and I think it ought to be spent playing.  I had no worries that Lyla could not learn her colors and counting, in the natural settings of home.  Not even the aspect of  the highly valued “socialization” swayed my thought.  Well, the more Jenny told me about what was happening at the “First United Methodist Church” , the more I liked it.  Lyla loved it from day one.  Only a few times in the very beginning, did Lyla shed a tear.  On those occasions, the teacher sent a picture of Lyla playing happily, within minutes.  I especially loved that.  There also does not seem to be  “an intense academically driven force’ present.  All of this, hushed my trepidation, but when Lyla ran to hug her teacher, one morning . . I fell “hook, line and sinker” for the darling “Ladybug class” at the beautiful church, in Elizabeth City.  Today, I saw for myself and so now I can say with all of my heart, I am glad, for such places.

After lunch, Lyla and I strolled to the laughing river-which today seemed merely tickled.   It felt sinful to stay inside.  We sat for a while in silence.  I did not allow myself to think of anything.  I just watched the river meander by.  I watched light playing on the water, like a happy child and I watched the thin clouds that reminded me of old  fashioned lace.  I have no way of knowing how long we sat in that state as time is not  measured under such conditions . . but at some point, Lyla was liberated from  the confinement of her stroller.  She found a yellow leaf and then watched a butterfly.  She walked the railway ties for a long while.  The ties are there to mark the parking area and for quite a distance.  The ties are not balanced well and are of varying heights.  In some places the wood has deteriorated and huge pieces of  wood are missing.  It was a good balancing practice for a toddler and I offered little help, because of that.

We spent the latter part of the afternoon on the porch dancing.  I teach a semester of dance-and so I know lots of kids songs to dance to.  I am not sure what folks thought as they walked or drove past the stately “Thompson Home”  that afternoon.  If they thought “the country has come to town”, they wouldn’t be far off.

When Lyla curled up on the settee in a patch of sunlight, we turned off the music.  I turned my attention from the “Cha Cha Slide”, to the kitchen.  We had a light supper. Lyla was barely awake when the moon came up.  Like the sun in the morning, the moon was bright  and fairly lit the backyard, though it was only half full.

Today was a lovely as any, and I did not regret for one moment, taking a day off from work, to spend my time with family.  Anne of Green Gables said “I am so glad to live in a world where there are Octobers.”  I am in full agreement . . .and the same could be said of September. 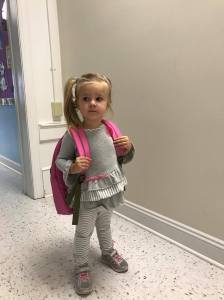 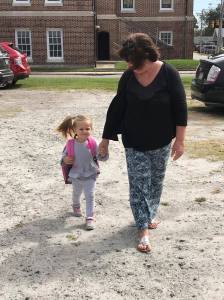 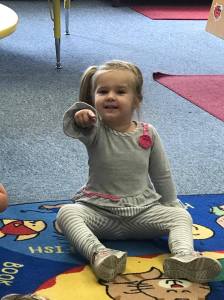