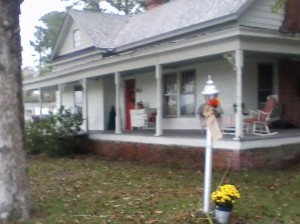 Here it is, just days before one of my favorite holidays . . .Thanksgiving.  I love the prelude to holidays.  It feels like a perpetual sense of opening a gift.  I love every detail. . . from planning the menu, to scrubbing the floor.  Thanksgiving is one of my favorite days.  A time to gather with family  and renew the ties that bind you . .  and a time to remember all that is right, in your life.

Over time, traditions are born.  They just seem to happen without forethought.  For many years, my sons got up a football game in the yard, every year after the meal.  It was hardly a serious affair, as Christian, the youngest, was carried across the yard to score a touchdown, when he was a toddler. (  I intentionally did not plant roses, in one part of the yard,  in order, to leave  a large, open space, for football.) At some point,  their little cousin, Brandon was carried – and each little cousin that followed.  Now, Brandon is in his first year of college.  . . Now the boys, are walking with Lyla, after the meal and playing hide and seek” with her  -and Jenny  lost all interest in football, many years ago.

Some years, such as this one, we have an “early Thanksgiving” celebration.  In such circumstances, I cook the meal, on Thursday anyway, for whoever can come. Mama and I planned a meal, around  the turkey, but with different side dishes.  Daddy does not even like turkey, and we took that in to account, but we are still having turkey.

I have the afternoon off, as school was dismissed early.  I   had to stop by the grocery.  What a bustling place that was, but folks were all so friendly and smiling.  Even the employees, which I felt such a sense of compassion for, were in high spirits.  I so wish, things were like they used to be.  Stores and businesses closed in lieu of the holidays, years ago and all had the chance to  observe the day as they saw fit.  Of course, this meant if you forgot to buy corn, you just didn’t have it and if you ran out of milk, the potatoes would suffer, but that seems a small and insignificant price to pay, after all.  I  would much rather know, that the young cashier was listening to her grandmother tell a story, that day or that the young men stocking the shelves, were with loved ones, eating pie, instead.  Sadly, those in professions that handle emergencies will always be needed, even on holidays, but putting out a fire, or caring for the sick, is a far cry from selling merchandise of any sort.

I drove home under a canopy of leaves the color of honey and apricots and some were as red as rubies.  The day was bright and clear skies loomed overhead.  Autumn was robbed of its’ usual glory this year.  The wind blew fierce and rain pelted the trees without mercy, on a good many days.  Still, the leaves that did not come unfastened, paint the landscape now.  Their attempt is sufficient, for the countryside is lovely.

The farmhouse still has boxes in every corner.  On Sunday, I found the largest stainless steel pot I own, in one of them.  I cooked the collards in that.  Miraculously, I found the pot with the very old roasting pan, in the first box I looked in.I will need that for the turkey. Oddly, these boxes were not sealed, as I had run out of tape, so no damage was done.

I had hoped a good old movie would be  on this afternoon.  Something like “The White Cliffs of Dover”  or “Miss Miniver” , but there was no such luck.  I was not in the mood for a mystery.  I have enough of that in my real life.   I had chores to do, and needed  a familiar story that I could watch in spurts.  I opted for “Little Women” which I had recorded, though I could not bear watching Beth die again, today. I would hang the curtains during that part.

Before I knew it, evening was settling across the territory and it was time to turn a lamp on.

I woke early on Thanksgiving.  With todays’  light fare, there was not the usual need, to rise before dawn, but out of habit, I did anyway. Only the turkey required any real time.  I didn’t dare turn the news on, for fear of hearing of multiple tragedies and crime.  Some times, I want my world small.

I washed the platter, with the cheerful birds on it.  I had packed that with the roaster.  My sister Delores, gave me the platter for a birthday, years back.  I never fail to think of her, when I use it.  Delores is very thoughtful with her gifting and will look high and low, for just the right thing.  In all my decluttering, I did not part with a single gift, she had ever given me.  The platter would be the prettiest dish on the table today, for I have packed up all of my fancy dishes and those boxes are sealed, until further notice.

By the time, light came to the rabbit patch, I was making the orange and coconut dish, that Miss Claudia loves.  I have not made that for Mama and Daddy before, but I suspect, they will carry some home, with them.  I decided to make some of “Jo Dees'” barbecue chicken for Daddy,too.  He will be relieved of not having to eat turkey, again.  I also made a small pot of chili, for them .  These almost cold evenings are the perfect time for a warm bowl of “something”, for supper.

I put on the corn and green beans before nine.  Long slanted rays streaked the rabbit patch about that time.  I thought about all of the fuss going on in kitchens everywhere.  There is something very pure about loved ones gathering for the sake of sharing a meal and giving thanks.  Thanksgiving does not have any thing else on the agenda and that makes it an extra special time for me.

I did not expect to still be at the rabbit patch, this Thanksgiving, hence the packed up dishes.  I was certain, all the business of selling and buying would have been completed, by now.  As it turns out, I was wrong again.  I had pictured myself in the little cottage, with the little dining room, and had wondered where everyone would sit.

For the longest time, I have done such daydreaming.  Now, after going through this long drawn out process, and having been totally off, by my calculating, I have a different stance.  I am dedicating my efforts to becoming an observer.  I no longer feel inclined to have an opinion about how things work.  . .and that includes human actions too.  As an observer, you simply gain information, without casting a judgement.  I needn’t think “Johnny is selfish, but instead that  it is difficult for Johnny to give”.  I shutter to think, how many times, I have cast judgement, and would have declared I did not, at the time.    I am making a gallant effort, and I need a lot more practice, but it is actually very liberating.

Now, make no mistake, thinking I am floating along unscathed by this current predicament-nor that I am not now wondering where the Christmas tree will go and hoping there are outside receptacales  . . . but I am willing watch how things work out . . .and  if – and when . . . with a new perspective.  That is one of the many things, that I am grateful for today.

The house smelled like Thanksgiving by mid morning and it looked like Thanksgiving, out of the kitchen window,  for the yard seemed as if it had been  “dusted  as heavily with cinnamon”, as the sweet potatoes  – with all the leaves scattered everywhere.  Cash, my boxer and my gray cat, Christopher Robin, slept  together, in a patch of sunshine, on their blanket.  In my small world,  at least on this day -there was “peace on earth”.   . .and I was grateful for that, too.

Happy Thanksgiving to all!   with love,  from the Rabbitpatch Diary !