The day after Thanksgiving  dawned brightly . . and cold.  Thankfully, there was no rush to our day.  Christian and I were going to Elizabeth City, but not at the “crack of the freezing dawn”.  Of course, the animals do not believe in sleeping, til the sun comes up.  If I so much as blink, they are in a crisis and need to go out at that very moment. Christian is an early riser too, so, between the two of us, everyone went out and came back in to their “breakfast”, while we had coffee.

Those moments are rare, for Christian and I  – and I do not take them lightly.  Christian works six days a week and has to be at work mighty early.  Many days, he is there by four am.   Not long after supper, Christian is in bed.  We have brief encounters, at best.  I do not know, the last time, that he and I shared a day off, so we were determined, to make this day count.

By mid morning, we were on the way to Will and Jennys’, where Brant and Tres , were waiting, also.  These are my favorite days.

The drive was beautiful and we noticed the leaves as we went along.  We pointed out to one another, the especially pretty scenes.  I decided I would plant a maple, after seeing several vibrant yellow ones.  We saw the scarlet dogwoods, and I thought to plant one of those too.

Some folks were already highly decorated for Christmas, we noticed.

When we arrived in Elizabeth City, it was like a reunion and a holiday rolled all in one.   Lyla, said it best when she proclaimed happily “Now, we are all together!”

Of course, with it being near noon, I set about fixing lunch.We had all sorts of food (left overs) on the kitchen island, and folks ate in shifts, as they got hungry.  Little Brynn was liable to turn up anywhere, as she was passed around like a precious china doll. Lyla was everywhere.  She and I were cozy for a while, reading a new book and then watching “Cinderella”, then she was off to a more adventurous (and rowdy) company, with her Uncle Brant.  Tres had secluded himself in the fancy dining room,to complete an assignment.  When the house became quiet, I went looking for Lyla.  She didn’t seem to be anywhere, but she was. . .  Lyla was in the dining room with her “uncle Tres” as quiet as a mouse and writing on a paper, with quite a stern countenance.  She said she “had work to do too”.  So, she sat quietly, with her uncle, for a while.

It wasn’t long after, we unpacked  our violins.  Christian had forgotten his guitar, so today, he played the violin, too.  Lyla was especially happy to have her own violin, this year.  She listened very carefully to our instructions, on what string to play on, for each carol. There were no guarantees, however, that she would stay there.  These are my favorite days.

Sydney, Brants’ fiance, made a blackberry wine cake and of course Lyla joined in on that.  The recipe came from  Sydneys’ grandmother  and is one of Sydneys’ favorites.  We have been looking forward to it, for a while and were not disappointed, when at last, the cake was cut.    We all went to bed early. We blamed it on the left over turkey, that we had for supper.

Apparently, every one in the family is an early riser.  I woke up extra early on Saturday, but not before Brynn.  Without  prompting, from Cash, nor Christopher Robin, I laid very still, collecting my thoughts and listened to all sorts of commotion upstairs.  Will came down the stairs first, to take the dog out.  A few minutes later, I heard the washing machine start.  I knew then, the day was starting and it was best to get up and join in.  Moonlight still washed over the landscape, when I was making coffee.  The next sound I heard, was a large flock of geese, flying over.  I rushed out just in time to see them flying across the very bright full moon.

I made sweet potato pancakes for breakfast.  We had so many sweet potatoes left from Thanksgiving, and it seemed a shame not to use them.  I made sausage too and eggs.  Not long after we ate, it started raining.  It rained hard enough, that the whole world looked silver-plated .

Brant brought the Christmas decorations down from the attic and Lyla was sure that this was the best day yet.  While they worked on getting the tree up, I emptied the contents of the refrigerator.  I found green beans,  carrots, corn and butter beans .  I found potatoes in the pantry and a can of tomatoes.  A pot of soup was in the making.  Sydney and I decided to go to the grocery,  which is just five minutes from the house.  We bought all kinds of cheese, for grilled cheese sandwiches and since we were there . . .and since the Christmas wreaths were being hung, I thought to buy the ingredients for “Scottish shortbread cookies”.   One of the neighbors is from Scotland, and she sent shortbreads for Christmas one year.  I decided these cookies were some of the best I had ever had.  Jenny agreed and so the first chance that I got, I took, to get her recipe.  Today, was the perfect day to make them, I thought.  There happened to be good metal cookie cutters in shapes, like snowflakes and angels, stars and gingerbread men, in the store, so I bought those too.

The tree was standing joyfully, in front of a window when Lyla found the Santa cookie jar.  She brought in the kitchen, and so went to work to fill it.   This day, we listened to Christmas music by Bing Crosby, as we baked.  If a catchy tune, played, then a dance started, right there in the kitchen!  By the time Lyla had used every cookie cutter from the very large supply twice, she was tired and I thought she was going to nod off in the soft dough!   Thankfully, Sydney stepped in and helped the long process. Somehow Lyla mustered the strength, to play her violin with Brant and I, while the cookies cooled.  Then she listened to a book, which Brant thought was the longest version ever written, of “Little Red Riding Hood”.  Tres laid beside little Brynn, during the reading . . .and he agreed with Brant.  It truly was, one of my favorite days.

Before I knew it, it was today . . .Sunday . . .the last day of our gathering.   Today, we had an agenda.   We had a late breakfast and food was packaged to be sent home with everyone.  Bags were packed and good byes were said.  I always take the partings, hard.  I consoled myself, that Christmas was not so far off.  . . and Christmas is full of favorite days. 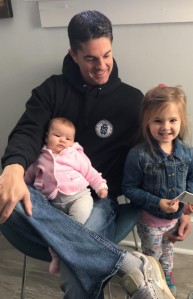 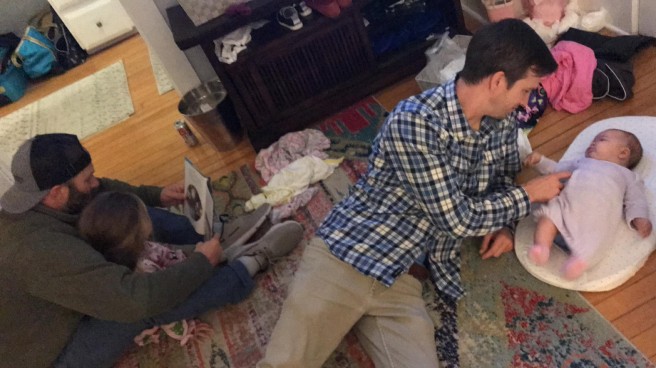