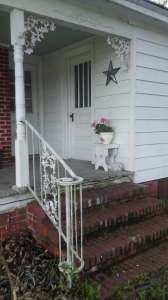 March did not come in “like a lion” this year!  February left softly and suddenly, just as softly . . it was March.  I have been with Will, Jenny and all of the grandchildren the last three days, at Brant and Sydneys’  home in the capitol city.

The temperatures were mild and showers fell ever so often. One day, the kids and their parents crowded in to a car and attended a drive through dinosaur exhibit.  Lyla knew the correct names of each one and what features determined the species name.  We really don’t know how, she learned all of that.  Brynn said some of them were scary and Ryan came back growling.

Another day, we all took a hike to a small secluded playground.  There were two hills to climb,but I was the only one that complained.  Ryan found a mud puddle while the girls tried every slide out dozens of times.  The weather was just perfect for such things.

On Sunday, after breakfast, we all started packing and cleaning.  Lyla was crying as she was so dreading the departure.  Brynn and Ryan started crying as we loaded the car.  Ryan was blowing kisses, with a little turned down lip and it was beautiful and heartbreaking, all at once.  We were not out of sight, when Brynn started asking, “What happened to “Bubby” (Ryan)?  “What happened to Aunt Sydney”?  “What happened to Uncle Brant”?  as she whimpered.  Lyla sat silently, with tears on her cheeks.  I didn’t want, the visit to end either,  but it was the love that the little cousins had for one another, that prompted my tears.  It is no wonder that they say “Baby brother cousin” and “sister cousin” .  Lyla coined these terms . . . and how accurately, it seems.

The unusual, gentle arrival of March remained for days, after my return to the rabbitpach.  Nights warranted a soft warm blanket, mornings demanded a jacket, but the afternoons were warm enough to coax some daffodils to bloom.  I always remember being young in the spring.  For a moment, I could smell the dirt, of Pops’ freshly plowed fields. I remembered Daddys’ beloved Purple Martins and the steady watch for their “scouts” that ensued, in early spring – and kites that Daddy used to build, every year, right about this time.  Mama would be making our”Easter dresses” and keeping a close eye on the azaleas, that would put every one elses’ yard in their place, for Mama has about fifty of them and dogwoods too.  What a beautiful spectacle, they still make! . . .and it all happened in March.

How beautiful, the world I grew up in was, I  often think. I did not feel privileged, but I felt valued. I never felt more  important than another living thing, but I did feel as  important.  One of the most priceless lessons, that I was taught, was not to need so much.  At a very young age,  I knew thoroughly, the difference of want and need.  It was absolutely fine  to wish, to hope and to dream, as long as we understood the difference between wanting and needing. I have profited from that concept all of my life.  I found out out that wants can change, if they are shallow. . . and a lot of mine were.  In some way, this taught me to define my real priorities.  I still use this concept.  Right now, I want a new percolator, for my old one quit on me without forewarning. . . but I need tires for the car, hence I am drinking instant coffee, for now.

Some things, I learned were not from “the sunny side of life”.  None of us were shielded from  the heart ache of death.  Dogs died and foals were stillborn.  For a child, the death of  a favorite pony was a sorrowful thing and monumental yet, my elders knew that they were not raising fragile china dolls.  We were made to feel ashamed  if our actions warranted it.  How glad I am for that!  It did not cripple us to be held accountable for wrong behavior.  Instead, we sought virtue, for guilt is an awful burden.

The one thing we were shielded from was the business of adults -and of the world.   I knew from a very early age, that Grandmama waited to iron or fold laundry or snap beans, the same hour, that “The edge of Night” aired. It was also the time for the youngest to nap and the older ones were to complete chores.  It took a terrible calamity, for us to interrupt her . To this day, I am curious about what happened in “the stories” , as she called them.   If a neighbor came to visit, we were to greet them and then scurry .  It was impolite to eavesdrop, after all.   The few times, that I managed to hear anything, they talked of someone not counting the stitches right in a quilt,or a  recipe or why somebody did not go to church, last Sunday. . .  Hardly interesting enough to captivate  .  Being wasteful  or behaving poorly in public, were considered “sins against the family”.   It may sound harsh, sometimes truth is.  There are many times, that I want to act in a disagreeable fashion, but somehow I regain control and  often, just in the nick of time,   I remember that I am still a reflection of my own “tribe”.

If I have given the impression, that those days were anything less than  beautiful, then I have failed-and miserably.   We were guarded tenderly and lovingly and because of that, I felt precious   -and besides between the great lessons,  we roamed the countryside for hours,unhindered.  We discovered, explored and developed wild imaginations.

I do not know if my elders were born full of wisdom or if they merely mimicked   their own elders,  but the results  are the same and remain, to this day.  The memories of those simple and heartwarming seasons act like a tonic, in the midst of the current chaos and shocks of these modern days.  Who knew, that playing in dirt and playing in the rain, saying our prayers and meandering through fields and woods -would make all the difference?

26 thoughts on “All the Difference”