Jennys’ birthday, dawned bright and clear, much like the day she was born.  Lyla and I sang “Happy Birthday” several times before breakfast.  Lyla wanted a cake and  party hats to confirm the occasion, at breakfast.

At the early service,  while robins sang morning music, I thought how glad I was to have a daughter, especially  like my Jenny.  Several squirrels were hurriedly burying acorns.  Snow was still lying in shade and a cardinal  looked as red as he ever had, when he stopped to watch the squirrels scampering wildly. It was a beautiful day for a birthday.

Jenny is my only daughter,born a few years after Brant.  Three other brothers followed, til a decade has passed.   Jenny seemed born with a maternal instinct.  She was also quite domestic, and baked pies most every day.  Her worst habit was drawing on walls.  She grew up climbing trees and rambling in the woods.  She also loved her dolls-one in particular, “Lady Jane”, that just happened to be a black rabbit, that wore a dress.  Lady Jane was her constant companion and accompanied us most everywhere we went . . until, Jenny announced, one day, that Lady Jane had gotten married.  After that, Lady Jane had a lot of housekeeping and children that needed tending ( some were kittens) -and so was mostly left at home.

Jenny as a child was very imaginative and talked to her shadow and her imaginary friend “Bo”, who was a little pretend  girl, that liked to bake pies, too.   The further away, the years became to  her childhood, the more Jenny became my saving grace, as she was so very helpful in the care of her youngest brothers.  It does not surprise me one bit, that she turned out to be a truly wonderful mother.

Lyla and I made brownies for Jennys’ birthday.  We wore birthday hats as Lyla was sure that we were supposed to, given the occasion.  Of course Jenny  wanted a healthy version.  Lyla cried when we added avocados .  The brownies turned out especially moist and no one could have guessed they were at least a little healthier than the average brownie.

For dinner, Will took Jenny to a fancy restaurant in Virginia, which is just about thirty minutes, from Elizabeth City.  Lyla and I took a walk by the “laughing river”, as the weather was so mild.  Snow lined the village streets like strands of lace.  The river was as smooth as glass and the sky above it was cloudless.  The thought crossed my mind again that it  really was a beautiful day for a birthday. 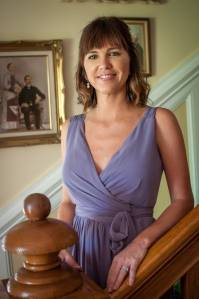