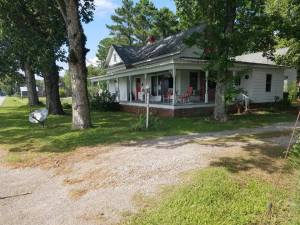 I must say it again . . .it is chilly at the rabbit patch!  Last night, I went out to see the sky as I can not stay away from the view.  There was Venus, bold and stunning.  Jupiter was bright  and with them thousands of stars .  I saw “where the dog ran” and I saw a shooting star.  It was absolutely fantastic and I was sorry for anyone that missed it.  I have never seen a summer night sky in sixty degrees, in all of my life.  I inhaled deeply to see the effects of this air, on the scents known only to summer.  I was reluctant to go in, for the unfamiliar beauty was surely some spectacular fluke and it beckoned to me with a lovely persuasion.

How lovely  it  was to wake to the cool of the morning.  I half expected to smell a faint whiff of wood smoke!  The early service was especially  brief as today, the long awaited roof project was on the agenda.  Though, the leak was fixed, months ago, the cosmetics had never been addressed, hence a bright blue tarp alerted the public, that  we were a procastinating lot . . or just plain lazy.

While Brant and Christian worked on the roof, I started sanding the kitchen ceiling.  It is a messy job and my arm started aching within the first twenty minutes. Every time, I took a break, the silence tattled about it.  Finally,  when the end was just in sight, the contraptions’ battery died.  That is when I came into my own, for I started supper.

How pleasant it was to slice the yellow squash and onions.  This is one of our favorite dishes -and so are green tomatoes.  Green tomatoes are hard to come by, unless you have a garden.  Very rarely, you can get them in at a farmers’ market.  Last year, a locally run grocery carried them, but only  on occasion, so your best bet is to grow them.  Mama and my sister, Connie, each gave me some this week and so the boys will have a generous helping of them tonight.

It felt like reliving times past. . .once again cooking for my children on an ordinary day.  Supper has always been a special time, for me.  We always ate as a family.  Only pleasant conversation  was allowed  and it was limited to happy subjects.  Supper was not the time to tell bad news or to quarrel.  I still feel the same way about that.  I would rather eat late than break that rule, to this day.

Another fact is, the cook ought not to be angry while preparing the meal, or else all will suffer.  Biscuits are likely not to rise, and the chicken may burn.  I have heard this from experienced cooks and have proved the theory true myself.  I suspect there is some science that could explain it.  . .but, whether it is fact or fiction . . it is best not to upset the cook and most especially, if you want gravy.

Tuesday was another cool morning.  I have heard the coolness will not linger much longer.  I am happy for every moment thus far.  What a reprieve it has been, from the oppressive, southern heat.

I all but missed the early service this morning.  What fragment  of it, I did attend was absolutely glorious.  Who can not love a cool bright morning?  The world is full of hope, in the morning.

I was painting a corner of the ceiling, before eight.  I still had a bit of sanding left.  I have learned that I do not like ceiling work in general.  The sanding is awful, as I noted yesterday.  I dislike it more now than I did then.  Painting is almost as bad.   . .and there is the ladder.  Climbing up and down a ldder completes the weariness.  I am sorry to say, I was quite grumpy and  had to take great pains to remedy that.

Brant and Christian, however, had renewed vitality – and youth, to start their morning chore.  Neither of them seemed the least bit worse, for the wear and tear of yesterday.  Brant walked around the house and pointed out several more projects that needed tending to . . .and quite happily, I might add.  He is the most tireless individual, I have ever met.   I am confident, Brant could have “built Rome, in a day”, if just given the chance.

By noon,  the boys were hungry and I was glad to have a valid reason to get off the ladder.  I did need to go to the grocery as we were dangerously low on coffee and completely out of milk.   I decided to bring back lunch, too.

The break did me good, and somehow I mustered the strength to start again. The boys ran into a setback on the roof right as it was near completion.  They were both disappointed as they had hoped to finish today.  They decided to start again tomorrow .    There was a trailer of debris that needed to go to a landfill.  The thing had been here as long as that awful tarp and  a tire had gone flat, in the meanwhile.  The boys went about fixing the tire and then drove off, satisfied they were at least accomplishing this task.   I was so glad to see the empty spot where the trailer had lived.

Meanwhile, I returned to the cluttered kitchen.  It was quite disheartening to see the kitchen littered with tools, rags,  paint .  . .and a ladder. I had gotten a lot done, I told myself.  Brant and Christian returned within an hour with the trash in tow.  The landfill was closed.  I did not like seeing my sons disappointed for the second time, this day. . .but I  was very careful to remain cheerful, as it was too close to supper to risk a poor disposition. . . for all our sake.   . .and  “Tomorrow is another day.”

20 thoughts on ““Tomorrow is Another Day””